Fly there by armchair… 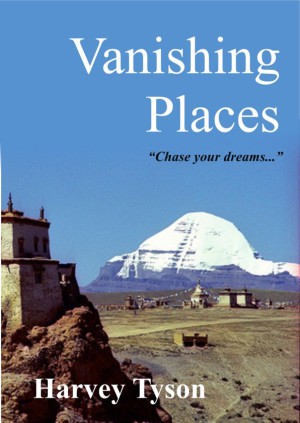 Vanishing Places – A Fine Way to Explore Them

The truth is that our planet has suddenly been over-run by tourists. The stampede happened in the last three seasons before the 9/11 attack on Manhattan (but has grown even worse over  years of so-called Recession.)

A stunned season-and-a-half after Americans watched their most cataclysmic movies come true in Manhattan, they started travelling again – but mainly hugging their own Atlantic and Pacific coastlines. Today they move in vast numbers, from Alaska to Cape Horn; from Puerto Rico to Punta Arenas, but – with few exceptions – they still tend to shun Europe’s outskirts, the Med and the Middle East.

A blessing, you think? Allowing more room and lower prices?

Into this vacuum have poured much greater millions of first-time tourists from China, Malaysia, Japan, India, Pakistan, South America, Africa and Australasia … all jostling for photos in places where we old travellers want to pedal our bikes in peace. At the same time, quick-rich Russians and the people of 25 prospering nations of the EU and jumbo-jet junkies are also rushing about the world, enthusiastically clogging up each other’s tourist sights.

Today, during an increasingly longer tourist season, you queue for increasingly longer times to reach the loo, or for a brief peek at the tiny enigmatic smile of a Mona Lisa. You could spend half a day waiting to peer at a painting in the Uffizi in Florence. Every tourist amenity seems overbooked, from theatres and restaurants to aircraft and, I suppose, call-girls. Everything is a frantic, irritable rip-off.

Even little known treasures and hidden places of interest or inspiration are in danger of sinking under the curious bodies of millions of aimless sightseers. You get squashed together on a ship or aircraft in order to set foot for a few moments on the vast empty continent of Antarctica. Or rush to the ferry-boats to overwhelm a picturesque port. You queue to climb Everest, even when it erupts in displeasure.
In the Galapagos Islands, suddenly, you can’t see the turtles for the turtlenecks of the tourists.

Dodging tourists has been my pre-occupation for the last five full decades, but the nature of the challenge, and the techniques, keep changing.

In “the good old days”, in places like the Namib and the Kaokoveld, the challenge was to travel for a fortnight without ever setting eyes on another human being – certainly not a tourist, who also has to count as a human being. You could do it by driving along unmapped tracks and sleeping in caves or river-beds But those gloriously empty days are long gone.

In more recent times the trick has been to visit great destinations like Samarkand or Belgrade on the eve of revolution, or Cairo after a terrorist attack. But too many tourists have learned that trick in the last decade. To avoid mass-tourism, you now have to judge the situation to a nicety.

Places like Dubrovnik in the Adriatic, once barred to tourists, are wall-to-wall with them now, and bursting the seams of their ancient city ramparts. Yet I once had the empty walled city entirely to myself for two glorious days and full-moon nights. It was hours before the Slavs bombed it.

These days, in semi-peaceful, non-violent Europe, it requires fine judgement to dodge the massed tourists – or better still to contemplate marvellous things they don’t  know about or would wish to see. In the East, it is hardly worth trying … unless you become expert at it.

The secret is to travel – not as a tourist, but with specific knowledge and intent. You will travel in winter or on the very edge of the expanding tourist season in uneasy times. Better still, visit the far edges of Europe during their 18-hour summer days; places such as northern Scandinavia, or north-west Scotland, or Finland.

Or taste some of the best of 50 vanishing places in the way they are described here.