A politician too good to last 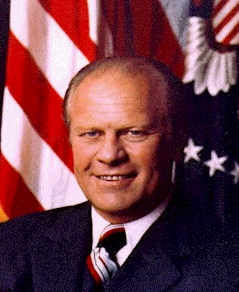 History is unlikely to be kind to Gerald Ford. It may even forget him. Yet it is worth considering that he should be revered, by his countrymen at least, as being one of the least ambitious, most punctiliously honest and kindest leaders in the big cruel world of national and international politics.

President Gerald Ford.
In politics, sincerity will get you nowhere

I say that purely on the evidence he has provided, “under oath” as it were. The only possibility that this evidence is skewed might be that he carefully omitted to provide some of it. But that is unlikely in view of his basic approach to admitting his human falibilities and mistakes, and with his awareness, especially after the Nixon scandal, that any deviousness was doomed to exposure.
Ford’s personal history in being propelled reluctantly into the US Presidency, is chronicled by himself under a well considered title A Time to Heal.* And it was in this very mode that he made himself highly unpopular by officially pardoning President Nixon who had rightly been forced out of office.
Ford’s rating in the popularity polls plummeted from a highly favourable 71percent all the wayddown to 49. He was wounded by accusations that he had allowed conflict of interest as a “financial benefactor” to sway his judgement in pardoning “his lifelong friend”.
Nothing was further from the truth. Nixon was not his friend, and “never gave me a dime” at any time, Ford said quietly.
What is revealing about this is that Ford writes of the accusation: “I had all I could do to keep my temper under control” and decided the slur was partly his own fault for failing to “get his story across” on this issue of healing.
That ‘turning of the cheek’ should be enough to make his popularity go down a few more points… but he had already turned his attention to another problem. Americans, he believed in this Nixon period of mistrust and political dishonour, were losing faith in themselves and their nation. Ford saw “a self-destruct attitude” that wounded the country and tore at his own convictions.
“We didn’t need newer goals or nobler ones. What we did need was a renewed sense of purpose and a strengthening of our national will to pursue those goals.”
So he promptly announced – as a Republican President! – a program for the return to society of Vietnam-era draft evaders and deserters. He announced the establishment of a Presidential Clemency Board to assist Vietnam War draft dodgers.
Brave healing indeed. And he did it in the same manner as he wrote his book: understanding the rights of those who opposed his view, and presenting his own story in “refreshingly unpretentious yet vivid” style.
He was unwilling to knife his political enemies. And he had nothing to hide. So – unlike Nixon –he appeared to have no sure place in history.

BUT… fortunately the American  nation is rich in freedom of opinion with many of its expressed – and voluntarily suppressed – prejudices  always open for review.  And now, decades after his brief political leadership, President Gerald Ford’s re-assessed role is about to be spectacularly celebrated.
In late 2016, the U.S. Navy announced that it was planning to launch a class of super-class aircraft carriers, and would name the first vessel the USS Gerald R. Ford.   placing his name back in the fore-front of naval history.
What a fine gesture. And what an irony!
Gerald Ford, the man of peace, will  be remembered now because the biggest navy in the world will send his name across the globe on the prow of the most powerful warship ever built.
* A Time to Heal published by W.H. Allen, 1979