Choosing between Truth, Freedom and Propaganda 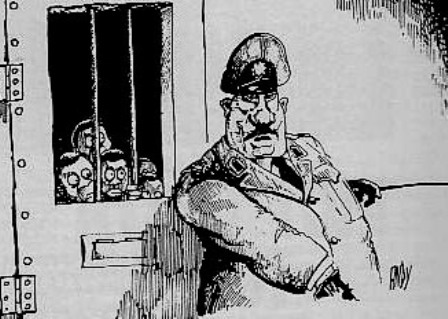 These paragraphs were excised from the chapter on “Conflict and the Press” in On My Watch in order to shorten and render it less esoteric.  Although the subject here borders on navel-gazing, it is highly relevant to readers  who are interested in newspapers and their own inner tensions.

. . . The Conflict and the Press debates were suddenly shaken up at The Star’s conference – by one of The Star’s own staff whom I had invited to present a different view.

Sam Mabe earned a reputation as a fine, balanced journalist who rose quickly to become one of our assistant news editors. He had his own opinion column in The Star, voicing his and other African views. He was also the chairman of the local, exclusively black Media Workers Association. I had hoped he would provide a view different from most of those already heard, but I was somewhat surprised by what he said. The essence of his theme can be summed up in three direct quotes:

“Throughout the capitalist world, economic and real political power are concentrated in the hands of a privileged minority, and since immoral means were used to acquire and maintain this position, its press has had to formulate all sorts of theories and distortions of history in order to justify their positions…

“The press promotes the myth that the imperialistic powers are the only source of culture, civilisation and science and technology for the Third World…

Well, bless his happy heart, Sam had outdone everybody. I couldn’t make out whether he was deadly serious about a dedication to propaganda, or pulling our legs. He was quoting some of the totalitarian communist stuff the Media Workers’ Union sometimes spouted , but which even its members did not take seriously.

Most delegates were speechless. The only direct response came from another black African speaker, John Coker, a BBC Current Affairs producer responsible for Africa: “I find Mr Mabe’s facts, his views, points, polemics offensive. In 18 years reporting in Africa I have nearly lost my life four times. Many of my colleagues have run the same risks, and many foreign colleagues have run terrible risks (in order to) report news and facts. I do not represent the views of any imperialistic organisation whatever. That is all I have to say.”

Soon, however, black delegates were rising to support Sam’s stated views. Said Pundelani Nefoloudhodwe, General Secretary of the National Council of Trade Unions and member of the Black Lawyers’ Association: “When Comrade Mabe reflected the realities of black journalists in this country, we who are black do understand very well why he had to say those things.”

Other ‘black’ delegates joined him. But Casper Venter of the Apartheid government’s Bureau of Information thought he knew better than anyone else how to stir trouble for The Star: “Will The Star publish a detailed account of this senior staff member’s speech?” he asked.

The chairman of the debate looked at me. My answer was one word. The chairman was Percy Qoboza, an old friend and editor of two banned newspapers and the then exclusively ‘black’ newspaper City Press.“In the true spirit of freedom of the press, the answer is ‘yes’.” said Percy. ” Support for freedom of expression. Any more questions?”

The extreme views, published in The Star under the name of one of its senior staff, resulted in no discernible public reaction and – much more important – no distraction from the unstated main purpose and climax to the conference… which rested in the hands of three ladies sitting in the audience.

Most of us knew that neither world opinion nor combined calls for press freedom would dissuade the apartheid government from shutting down newspapers in South Africa, let alone dissuade it from abandoning rule of law. At the very least, however, newspaper readers were being made aware that the government’s constant accusations about our papers’ “bias and irresponsibility” were themselves biased and irresponsible.

And at least the Nationalist Party’s barrage of attacks on the Opposition press for its “capitalistic greed, propaganda, and treacherous lack of patriotism” had all been weighed on this world stage in apartheid South Africa and totally rejected. (Just as the party political accusations of  “Capitalist greed “of the press are dismissed by the majority in the outside world today.)

But for me the key, though unspoken, issue of the conference – the main reason for holding it – was to gauge whether the independent, mainline anti-apartheid ‘Opposition Press’ in our country still had a role to play in the incipient struggle for power and the Nationalist Party’s fight to survive.

For several years in the past I had observed our independent Argus Company newspapers in Zimbabwe falling foul of Ian Smith’s Rhodesian civil war censorship and being ordered to take sides.
(“ You are either with us or against us”).
It was virtually impossible not to capitulate in a full-scale civil war. The Herald and its smaller sisters survived that wounding and utterly divisive struggle by less than a hairsbreadth, for it had been impossible to report the war at home adequately. The Herald held onto its principles and independence only by bitter obstinacy, supported by its ultimate proprietors in The Star building in another country.  It was soon to lose its precious independence – and its principles – when Mugabe’s government took possession of the newspapers. Soon thereafter the newspaper also lost its influence and its credibility.

It may require much effort in South Africa in 2016 to ensure this result doesn’t occur in its threatened democracy.